I have examined quite a few PhDs over the course of my career, both in English and in French, but until last week I had not had the opportunity to participate in a doctoral defence at a Nordic university. Last week I travelled to Åbo Akademi University in the Finnish city of Turku to serve as the opponent at the PhD defence of a thesis (in English) entitled Social media and public libraries: exploring information activities of library professionals and users.

A number of other activities were also fitted around the defence, one of which was an invited research seminar delivered to staff within the School of Business and Economics. Entitled Joining it all up: developing research-practice linkages in the UK, my presentation covered efforts to strengthen research-practice linkages within the UK library and information science community since 2009, and the possible impact of this work. (The slides are available from my Slideshare page. Dr Isto Huvila has also kindly blogged my presentation.)

The PhD candidate on Friday was Maria Kronqvist-Berg. Maria works as a library director in the municipality of Malax on the west coast of Finland about 350 kilometres north of Turku. The broad theme of her doctoral study is social media and public libraries. A large proportion of published studies on social media in professional settings privileges the technologies themselves (for example, my own work on librarians’ use of Twitter), or focuses on particular applications such as marketing. It also tends not to consider all stakeholders in the mix. In contrast Maria’s study explores the interface where public library staff, services delivered by social media, and library users meet. As such it makes a contribution to what is currently just a small body of knowledge on social media deployment, and professional and user perceptions of this. 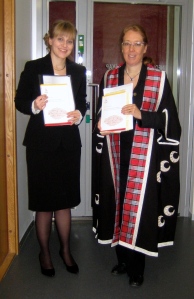 The findings from the study reveal the opportunities and challenges of social media as a channel for information services delivery. Significantly it throws doubt on the validity of considering this form of delivery as a separate from other services offered by public libraries. It thus challenges a discourse of Library 2.0 evident in the peer-reviewed and professional press. By highlighting how librarians balance and integrate social media with library services, Maria’s thesis provides a more realistic view than that promoted by advocates of Library 2.0. Maria’s work also evaluates the opportunities and limitations of conceptions of social media applications as platforms for collaborative activities with users, and thus will be of interest to practising library and information professionals keen to consider critically the use of social media for the development of their services. (The full thesis is available in English to download as a pdf from the Åbo Akademi University library repository.)

It is always an honour and a pleasure to serve as an external examiner. What makes the Nordic experience special, however, is the very public nature of the defence. This is in complete contrast to the rather private and closed nature of the British PhD viva. Maria’s defence on Friday was played out over the course of just under two hours in front of an audience of about 50 colleagues, friends and family. The audience members even included a baby, who mewed gently from time to time in a pram positioned in the back row of the auditorium. 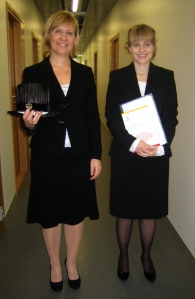 The defence followed a well-established timetable which began when Maria (the candidate), Professor Gunilla Widén (the candidate’s supervisor and chair of the defence) and I (as opponent) processed into the auditorium in front of the audience members, who all stood up as we walked by. In the first few minutes Gunilla opened the defence with a few words of introduction, and by placing the doctoral hat – a symbol of academic freedom – on the table at the front of the auditorium. (The use of the hat is described in more detail on the Åbo Akademi University web pages.) Then Maria gave a lecture on her work in Swedish, and I responded with a short speech of my own (in English). Once these preliminaries were concluded, we moved on to the questioning, which lasted about an hour. I first asked Maria some general questions, then we discussed the methods that she deployed for her study, and finally we considered the study’s outcomes.

For the defence I wore an Edinburgh Napier gown. There is not a tradition of academic dress in Finland, so I anticipated that the audience would be rather interested in my outfit for the afternoon. I therefore explained the history of the gown at the start of my speech, referring to its development from academic and clerical dress of the medieval universities of Europe to its ceremonial use today. This also gave me a chance to speak about the medieval Scot after whom my university is named (mathematician John Napier of Merchiston), logarithms (celebrating 400 years in 2014), and the decimal point. 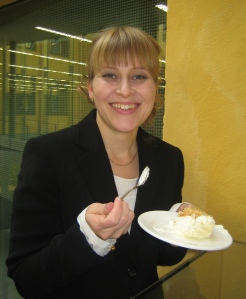 After the defence there was a University reception at which tea and apple cake were served. That same evening Maria followed tradition by hosting a dinner in the honour of the opponent. Others at the meal included the candidate’s family, fellow PhD students, and colleagues from the University. The meal was fabulous. Indeed the first course of gravlax and beetroot is one of the most delicious starters that I have ever tasted. Between each course there were speeches from the candidate, her supervisor, and me. It really was a lovely occasion.

There were lots of other wonderful little moments throughout the day of Maria’s defence. I loved watching the pride of the candidate’s parents as she gave her opening presentation at the start of the formal proceedings, and witnessing her friends line up to congratulate her afterwards. I was also delighted that Dr Tuomas Harviainen, who I had met before at a Finnish conference in 2011, travelled all the way from Helsinki to watch the defence, and to hand-deliver to me a copy of his own PhD thesis Systemic perspectives on information in physically performed role play. Tuomas explained that he followed up some of the recommendations that I made to him about his doctoral studies three years ago, and these had a great influence on his final submission. One of his reasons for attending the defence was to be able to thank me for my advice in person. 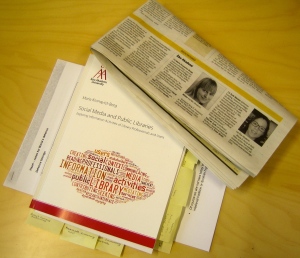 Something else that impressed me on Friday was how the tradition of the public defence helps with the rapid dissemination of research findings, presented in an accessible way, to the general public. Since anyone can come to listen to the defence, the University advertises it widely, and this encourages press coverage of the student’s work. For example, if you can read Swedish, do take a look at this press report. Such a system addresses the issues of the researcher-practitioner gap in domains such as library and information science, as outlined in the seminar presentation that I delivered at Åbo Akademi on Thursday.