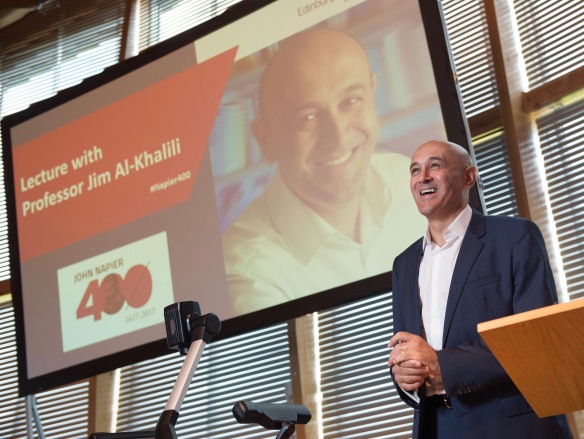 2017 marks the 400th anniversary of the death of John Napier after whom Edinburgh Napier University is named, and whose former home – Merchiston Tower – is situated on the campus where I work. Over the course of 2017 a series of events has commemorated John Napier and his work.

Amongst these, last month on 21st September 2017, award-winning author, broadcaster, and academic Professor Jim Al-Khalili gave a public lecture entitled ‘Future science: advances that will shape the twenty-first century’ at Edinburgh Napier University’s Craiglockhart campus. I introduced the lecture. Afterwards my colleague Assistant Principal Dr Sandra Cairncross gave the vote of thanks and chaired the Q&A. Then there was a drinks reception during which many members of the sell-out audience had the opportunity to discuss the content of the lecture with one another, and with Jim.

The formal proceedings of the evening were recorded, and the video itself is now available on YouTube and below.

Although the focus of the presentation was the future, Jim began with a nod to the past and the work of John Napier (with slides that are spookily similar to those that I use when I give invited presentations abroad, such as slide 21 of my presentation delivered in Brazil last March).

He then set the scene by drawing attention to the big challenges of the future, in particular those related to meeting the demands of a growing global population. He referred to the UN sustainable development goals, arguing that while science can help towards these, other factors are at play here, such as political will and economic policies. This comment prefaced later observations about the need to address the sociotechnical issues of scientific discovery and development, not least in respect to ethics.

On a more optimistic note, Jim spoke about his hopes for the future through the connecting up of previously unconnected areas of scientific work such as nanotechnology, genetic engineering, synthetic biology, and quantum technology. While doing so, he drew attention to some current developments that excite him, such as the work of Professor Jennifer Doudna on genome editing.

Jim shared with the audience his ‘top physics’ questions on issues that we do not understand. (He noted with a smile that he regularly receives emails from (unqualified) people who claim that they are able to answer them!) The questions are:

Then he listed some more general science questions of interest:

Of course, it is currently impossible to answer these questions. Instead Jim shared his views on them in the spirit of the Danish proverb with which he ended his talk: ‘Prediction is difficult, especially when dealing with the future’.

Sandra then gave the vote of thanks and invited members of the audience to ask questions. The discussion that followed covered a variety of themes. These included the scientific knowledge of politicians; the balance in educational provision between the sciences and other subjects; the role of technology in the evolution of the human species; and the impact of automation on society at large. Jim was also asked to identify his favourite guest on The life scientific. After a degree of hesitation, he named Professor Peter Higgs.

Perhaps the most interesting interaction in the Q&A came when a youngster in the audience asked a ‘proper’ physics question about the future discovery of the graviton. Jim suggested that the questioner might be one of those who will progress this work, and Sandra then invited him to come back to Edinburgh Napier University in twenty-five years to tell us all about it. I hope that I will still be around then to witness this myself!