Over the past couple of days I have achieved something that I would never have agreed to attempt in ‘normal’ times: I attended two PhD examinations on two different continents, 19 hours apart*.

Yesterday afternoon, on Thursday 17th June, I served alongside Crispin Coombs of Loughborough University in the UK, and Dario Alliprandini and Claudia Aparacida Mattos of the Centro Universitário FEI in Brazil, as a member of the PhD examination board of Hugo Watanuki. 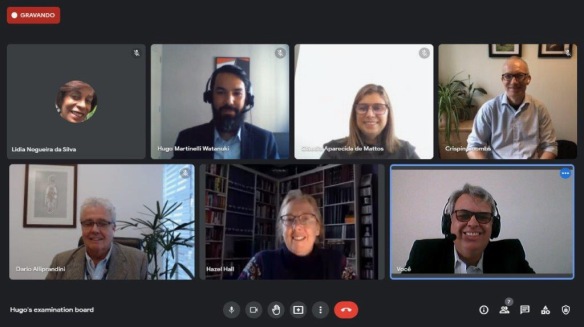 Hugo completed his thesis entitled The effect of information disclosed via public profiles from social networking sites on the initial formation of trust in new virtual partners at the Polytechnic School of the University of São Paulo, Brazil under the supervision of Renato de Oliveira Moraes.

This morning I joined a Zoom meeting hosted by Åbo Akademi University, Finland for the PhD examination of Ming (Vincent) Zhan. The discussion of Vincent’s thesis Public libraries meet big data: roles, comprehensions and practical applications was chaired by Gunilla Widén. Gunilla is the Director of Studies for Vincent’s doctorate and I his second (external) supervisor. Following Finnish tradition, Vincent had just one external examiner. Vincent’s ‘opponent’ was Mike Thelwall of the University of Wolverhampton.

Ming (Vincent) Zhan and his Director of Studies Gunilla Widén

Although the universities at which the students are registered are almost 7,000 miles apart, the two defences had more in common with one another than with the British viva voce for the assessment of doctoral work. First, they were open to the public. Second, the theses of both students were presented as PhDs by Published Works. In addition, the expectation at this type of defence is that the event marks the end of the PhD process, as was the case for this week’s two successful doctoral candidates. In contrast, in the UK it is more common than not that candidates are asked to make amendments to their theses after the examination. This means that there is usually some extra work for candidates to complete post-viva. Only when they have dealt with their ‘minor’ or ‘major’ corrections can they be confirmed as ready to graduate.

My involvement in the work of both Hugo and Vincent can be traced back to my participation at the 2nd International Data and Information Management Conference (IDIMC), hosted by the Centre for Information Management at Loughborough University on 12th and 13th January 2016. It was here that I struck up a friendship with Hugo’s Director of Studies Renato Oliveira Moraes, and that I met Vincent for the first time (as noted in my blog post about the conference). It is very satisfying that these relationships first established at IDIMC five years ago allowed for my participation in the doctoral work of Hugo and Vincent. The impact of the connections between our institutions is particularly obvious in the write-up of Hugo’s thesis and his application of the doctoral work of Frances Ryan (who also attended IDIMC) to develop his own contribution to theory development on the formation of trust online.

Congratulations to the new doctors Watanuki and Zhan! It has been a real pleasure to play a part in the successful outcomes of both doctoral studies.

*The shortest flight time between the two cities is 16 hours 44 minutes, but I am not sure that I would ever want to go straight from a transatlantic flight into a PhD examination!

The Scottish Graduate School of Social Science (SGSSS) summer school 2021 runs this week between 14th and 21st June. The PhD students in the Centre for Social Informatics have signed up for several sessions at the summer school. In addition, on Thursday afternoon two of our students – Marina Milsoheva and Thoko Kachale – are hosting a rerun of the training event that they ran successfully in February this year. END_OF_DOCUMENT_TOKEN_TO_BE_REPLACED

Workplace information literacy: measures and methodological challenges is a new paper published this week in the latest issue of the Journal of Information Literacy. Centre for Social Informatics colleagues Peter Cruickshank and Bruce Ryan are members of the team of authors who co-wrote the paper under the leadership of Professor Gunilla Widén of Åbo Akademi University. END_OF_DOCUMENT_TOKEN_TO_BE_REPLACED

Following the completion of our Royal Society of Edinburgh (RSE) funded Research Impact Value and Library and Information Science (RIVAL) project at the end of March 2021, Dr Bruce Ryan and I are each pleased to have an opportunity to speak about this work at two different conferences this week. The first is the Chartered Institute of Library and Information Professionals Scotland (CILIPS) annual conference, which opened today. The second is the annual conference of the Scottish Confederation of University and Research Libraries (SCURL), which takes place on Wednesday. END_OF_DOCUMENT_TOKEN_TO_BE_REPLACED 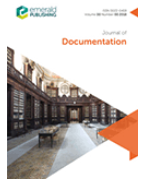 Workplace information literacy: a bridge to the development of Innovative Work Behaviour is a new paper about information-related determinants of Innovative Work Behaviour (IWB). I co-authored this paper with Dr Lyndsey Middleton, drawing on the findings of Lyndsey’s ESRC/Skills Development Scotland-funded doctoral research* completed within the Centre for Social Informatics. The paper was accepted for publication in the Journal of Documentation last week. END_OF_DOCUMENT_TOKEN_TO_BE_REPLACED 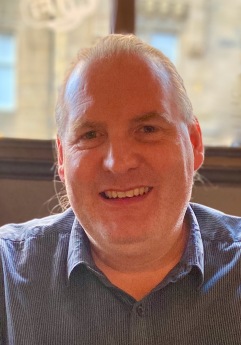 The 13th Qualitative and Quantitative Methods in Libraries International Conference (QQML2021) takes place this week from Tuesday 25th until Friday 28th May. At the conference, Dr Leo Appleton, who completed his doctoral study within the Centre for Social Informatics last year, is presenting a paper that he and I have co-authored.

Entitled ‘Using a multi-location, longitudinal focus group method to conduct qualitative research into the role of public libraries‘, the theme of our paper is the novel multi–location longitudinal focus group method that Leo adopted for the empirical phase of his PhD research on the role of UK public libraries. In his presentation slot on Tuesday, Leo will discuss the value of data collection from fifty–three participants in three rounds of focus group meetings in eight UK public library authorities. He will explain that this approach generated a rich data set for qualitative analysis. In particular, he will draw attention to the increasing level of sophistication and depth of discussion amongst the study participants over the course of the three rounds of focus group meetings. Leo will also acknowledge participant attrition as the main drawback of this approach. END_OF_DOCUMENT_TOKEN_TO_BE_REPLACED 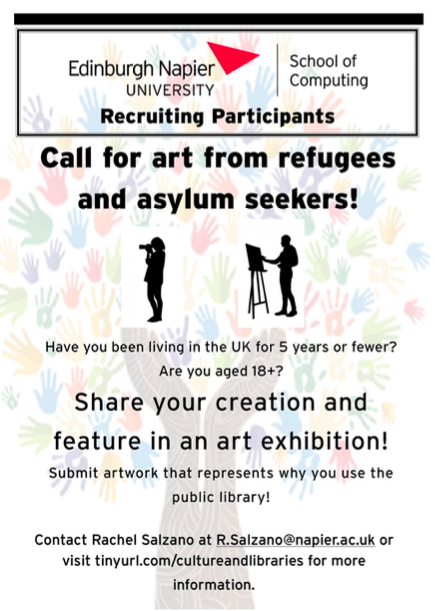 Centre for Social Informatics PhD student Rachel Salzano is currently seeking submissions for a public exhibition of art work to represent the reasons that refugees and asylum seekers use UK public library services. Rachel will be pleased to feature all types of art work in the exhibition, including, for example, photographs, paintings, collages, and 3D creations. END_OF_DOCUMENT_TOKEN_TO_BE_REPLACED

We invite applications for a fully-funded PhD studentship within the Centre for Social Informatics at Edinburgh Napier University.

Over the past couple of months, my colleague Peter Cruickshank has been leading work on the development a new collaborative blog to showcase the work of our research group at Edinburgh Napier University. END_OF_DOCUMENT_TOKEN_TO_BE_REPLACED 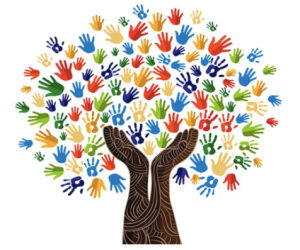 Do you know or work with adult refugees and/or asylum seekers who have lived in the UK for 5 years or fewer? If so, please could you let them know about this opportunity to contribute to an on-going research project within the Centre for Social Informatics by completing a short online questionnaire at tinyurl.com/culturepubliclibraries. END_OF_DOCUMENT_TOKEN_TO_BE_REPLACED 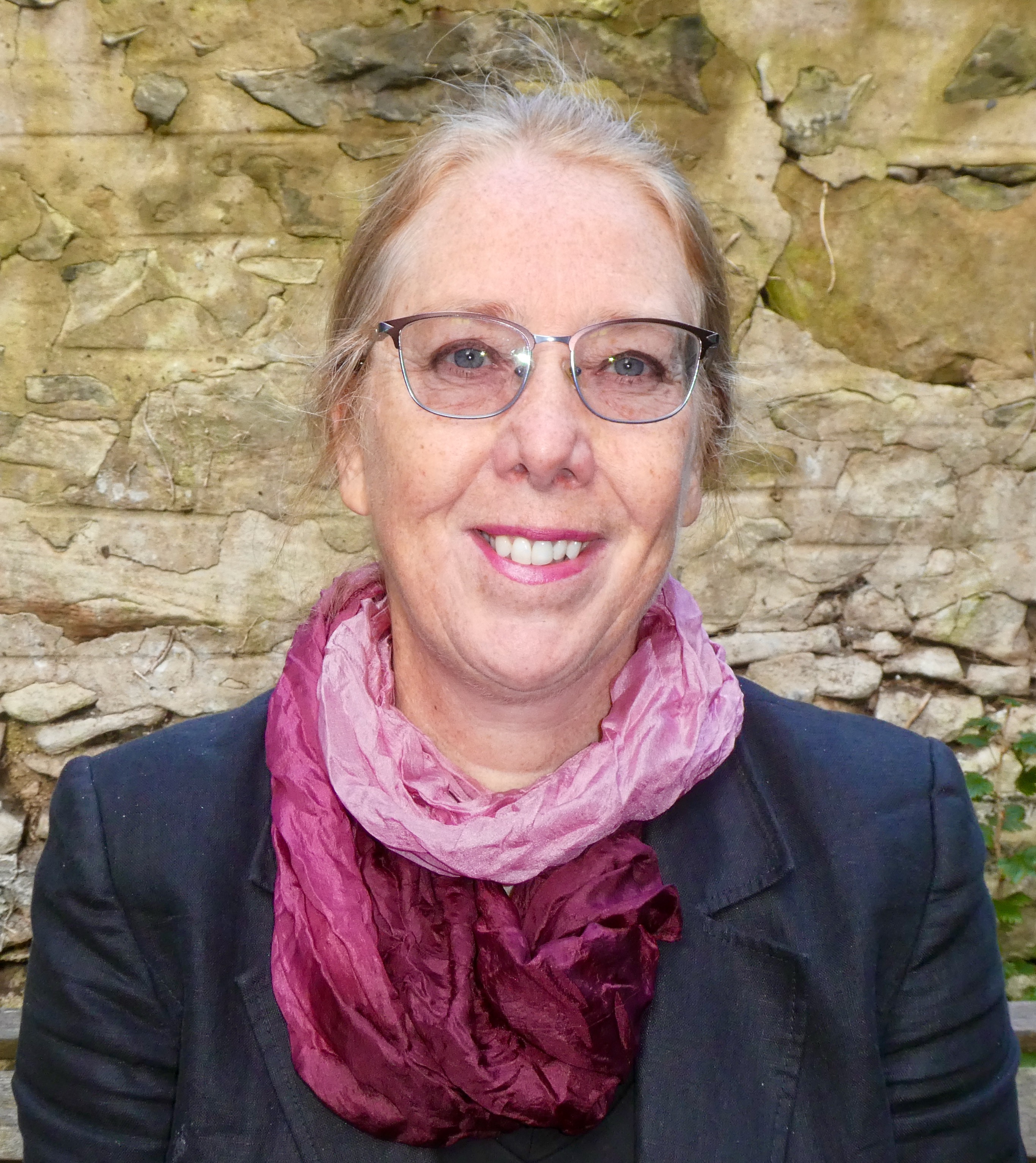