This is what a STEMinist looks like: Professor Hazel Hall, Edinburgh Napier University

Women and gender equality champions have been asked to post photos of themselves in their STEM environments: a university, college, office, laboratory, or construction site. Equate Scotland wants to promote the idea that diversity in STEM is not an anomaly, but instead a shared goal. 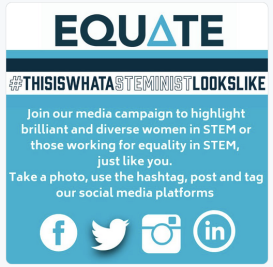 For this reason today I posted to Twitter a photograph of myself at the desk that I use when I work at home. Here it can be seen that I am proudly wearing my steminist T shirt.

If you would like to see other women doing the same kind of thing, check Twitter for the hashtag: