Clare, Pam, and Susan on stage in the yurt (photo credit Jo Young)

Last Thursday Edinburgh Napier University microbiologist Dr Clare Taylor and her co-presenter Dr Pam Cameron (NovoScience) welcomed a sell-out audience to the yurt in Edinburgh’s St Andrew Square at their Fringe show Women! Science is not for you! Over the course of an hour they highlighted evidence to show how the gender balance in science careers shifts in the favour of men the further you look up the career ladder. They discussed the reasons for this, considered whether or not this is a problem, and debated possible strategies to bring about change. A key question is how to stem the flow of wasted talent that escapes from the “leaky pipeline” of women in science, as identified in the Royal Society of Edinburgh’s Tapping all our talents report of 2012.

Clare and Pam were helped along by compère stand-up comedian Susan Morrison. Susan was delighted to be a “scientist” dressed in a lab coat for the afternoon, especially given her history of bad behaviour in chemistry classes at school. If only her teacher could see her now!

Although the theme of the show was serious, from the outset the presenters used humour to get their message across. They started off by announcing that they would be boldly going where men had gone before, then launched into a sketch which cleverly portrayed sexism at work by applying to men what is often said about women and their unsuitability for promotion. In keeping with the role reversal theme, throughout the afternoon’s performance a male topless “model” (Pam’s cousin) paraded across the stage holding up charts and tables to display the evidence that supported the presenters’ arguments.

The audience also made some amusing contributions. My favourite came in a discussion of imposter syndrome. A female psychology academic in the audience explained that she had considered turning down a request to referee a journal article on the basis that she didn’t have the requisite expertise to complete the task. The irony was that the article in question was about imposter syndrome! I also loved the moment when a baby heckled from the back of the room – just at the point that maternity leave was under discussion. 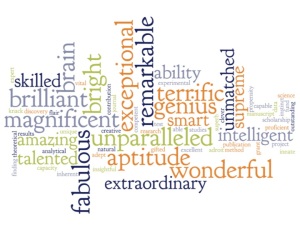 By the end of the session it was clear that a number of reasons account for the leaky pipeline. These include plain, old fashioned, illegal, sex discrimination (see for example, the findings of a recent survey reported in the Guardian). Another form of discrimination is evident in its more insidious partner: unconscious bias. See, for example, the vocabulary commonly used in references for male and female job applicants (left). These terms derive from a study by Schmader, Whitehead and Wysocki published in 2008. This research shows that the gender of job applicants makes a difference to how they are portrayed in letters of recommendation. Women’s reluctance to boast about their achievements at work is also a problem in an environment where men use this tactic to progress.

There was much discussion as to how these issues arise, with a focus on how children learn about gender difference through society’s expectations of boys and girls (for example in the marketing of toys sold as two lines for commercial reasons). We also debated what can be done to promote equal opportunities in science careers. Suggestions included encouraging women to learn the tricks of their male colleagues and learn to flaunt their accomplishments more readily, and ensuring that those who write references for female staff who seek promotion are aware of how vocabulary choice can make a difference to the perception of the candidate in the eyes of the selection panel. As someone who is frequently asked to write such references I will be paying close attention to my own practice in the future.

Clare, Pam and Susan are to be congratulated on a putting together a great one-hour show which conveyed some important messages in a very entertaining way, challenging the statement of the show’s title with enthusiasm and verve.

Women! Science is not for you! was part of the Cabaret of Dangerous Ideas, organised by the Beltane Public Engagement Network and produced by Fair Pley. (There’s further information on the themes discussed here in the preview of the show on the Software Sustainability Institute blog.)