On Monday 15th June I set off with my colleague Dr Clare Taylor for a day trip to London to participate at the Athena SWAN awards ceremony for all who made successful Athena SWAN award submissions in November 2014. It was a long day: I was up before 4:00am to be sure to catch the tram to the airport in time for the 07:20am flight to London City Airport. 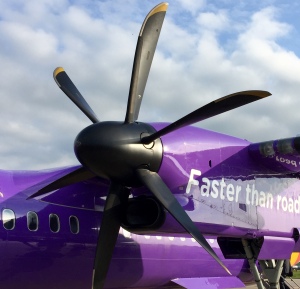 Flight BE1329 to London City airport

Our final destination was the Old Royal Naval College in Greenwich. 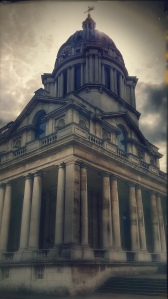 The building in which the ceremony took place looked less spooky in real life than Clare’s photograph above might suggest. 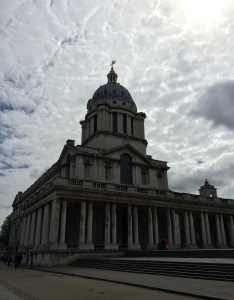 Indeed, all the college buildings are beautiful. 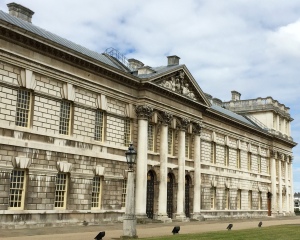 It was easy to find the precise location of the ceremony due to the strategic placement of Equality Challenge Unit banners.

Inside the stage was set. 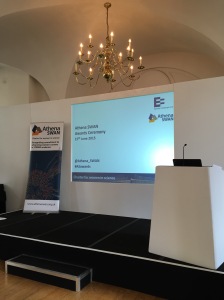 The hall was packed. 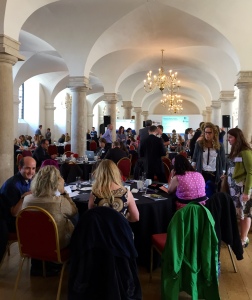 The schedule for the day was given in a booklet. I was thrilled to find that the design drew on the work of Dame Jocelyn Bell Burnell because (co-incidentally) I would be referring to Bell Burnell’s work in my own presentation at the event later in the day. 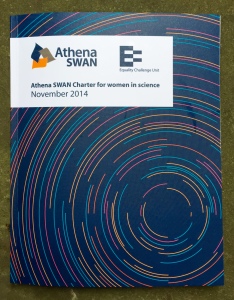 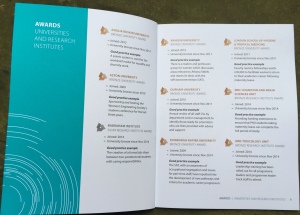 The speakers for the day were also profiled in the booklet. In the morning we heard from:  our host Professor Judith Burnett, Pro Vice-Chancellor of the University of Greenwich; David Ruebain, Chief Executive of the Equality Challenge Unit; and Professor Dame Julie Higgins, Athena SWAN Patron. There were two invited speakers in the afternoon, each of whom was from a university that had won an Athena SWAN award in this round. I was delighted to be approached to speak at the event. In the booklet my profile appeared next to that of Professor Linda King of Oxford Brookes University, the other invited speaker. 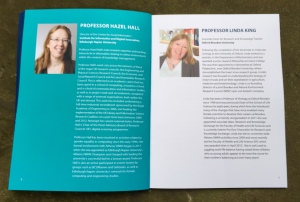 The Edinburgh Napier University representatives were called up to the stage in the morning. 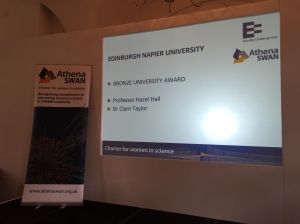 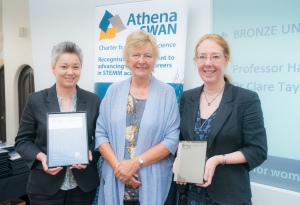 We were given a certificate and a trophy to take back home to Edinburgh. 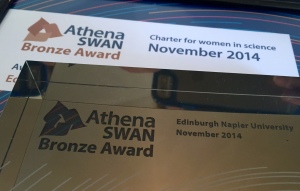 Everyone enjoyed a lovely lunch. 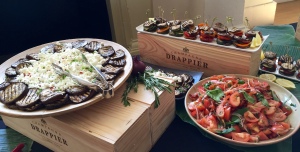 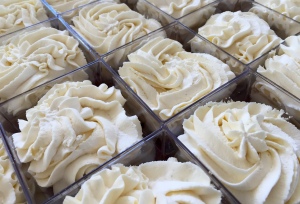 During the lunch break I had a wander around the building. 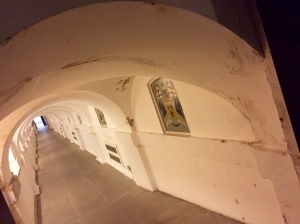 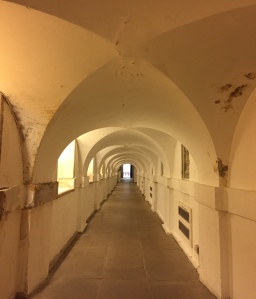 I also popped outside to take a photograph of our awards in situ to insert into my presentation as an ‘extra’ surprise after lunch. (With special thanks to Professor David Brown of the University of Kent. David helped with the rather awkward engineering of this shot.) 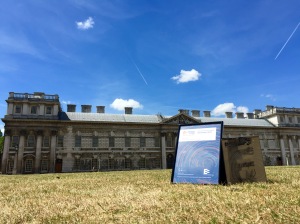 I took the stage at 2pm. 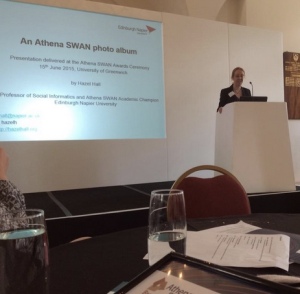 My slides can be found on SlideShare and below.

Much of my presentation was about the engagement activities that the Edinburgh Napier University Athena SWAN Self Assessment Team undertook last year, including the use of a University-wide screen saver in October 2014. 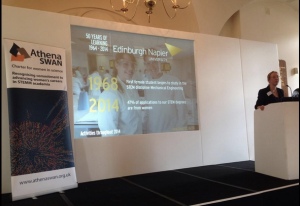 After the second university presentation the remaining award winners collected their certificates and trophies to take home to their respective Athena SWAN Self Assessment Teams.

All in all it was a great (if long) day out, and a fitting way to celebrate our Athena SWAN bronze award with all the other universities that made successful submissions in November 2014.