Today is Ada Lovelace Day, the international celebration of the achievements of women in science, technology, engineering and maths (STEM). At Edinburgh Napier University we’re marking the day with a public lecture to be delivered by Dr Maggie Aderin-Pocock this evening at our Craiglockhart campus. In her presentation Dr Aderin-Pocock will address the question of why so few girls take up careers in science, technology engineering and maths. She will explain why we need more women in these areas and propose strategies to encourage girls to study the STEM subjects at school so that these career routes are open to them.

I recently participated in a radio discussion on this same theme as a guest on the Stephen Jardine Show on BBC Radio Scotland. The other guests were computer games designer Sophia George, and Yusra Hussain of the Robogals Southamption chapter.

To kick off the conversation Jardine first asked me to summarise the achievements of Ada Lovelace, the nineteenth century countess who is regarded as the world’s first computer programmer. This led into a discussion of how unusual it is for women to follow STEM careers, and why this might be the case, drawing on the experience of the interviewees. We referred to reasons why girls can be put off computing and other science subjects. These ranged from confidence in the classroom to how STEM subjects are marketed to, and conceived by, young people.

While the influence of universities on teenagers’ choices of school subjects might be limited, I took the opportunity to outline how we create a welcoming environment for female students who come to Edinburgh Napier University to undertake degrees in STEM subjects. For example, we host the lively Connect network for our female students in engineering and computing. The students also have access to a strong set of role models. For example, the Dean of the School of Computing is female, as are 38% of the professors in the School. This is an impressive figure when compared with the UK benchmark of 18% for science, engineering and technology. I also pointed to the recent steady increase in the number of female students who join the undergraduate courses in the School of Computing and the School of Engineering and Built Environment at Edinburgh Napier. The 2015/16 figures are up 3.5% and 2.7% respectively on those of last year, and for the latter they are up 6% since 2013/14.

The discussion ended with consideration of the future participation of women in STEM careers. I argued that it is an economic imperative that women are encouraged into STEM, not least because of the current UK skills shortage in engineering and computing. For example, Engineering UK reports that 19% of firms struggle to fill graduate engineering vacancies, and the Royal Academy of Engineering has identified that we need another million engineers by 2020. When the Labour Force Survey shows that just over half the UK workforce comprises women (50.1%), yet just 14.4% of the STEM workforce is female, the opportunities for a talented female population in STEM to grow and make a strong contribution to the economy (as well as enjoy interesting and well-rewarded careers) become clear.

The discussion was broadcast live on 18th September 2015. If you would like to hear it, the broadcast of the whole show is available on the BBC Radio Scotland web site until 18th October 2015. Our segment starts at 02:33:24. 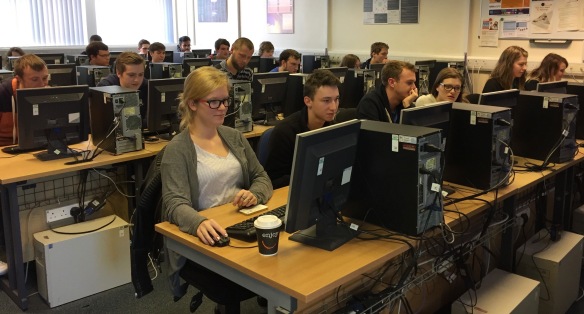