We would much rather have been able to keep to our original event timetable, with Event 3 in March this year, and Event 4 in July. However, when the Royal Society of Edinburgh offered us the opportunity of a no-cost extension to the project, we leapt at the chance. This would allow for more time to plan and deliver the last two events virtually, should the need arise. By autumn 2020, it was obvious that this would indeed be the case.

Fortunately for us, by this point of the pandemic, we had attended other virtual events as participants ourselves. We were thus able to draw on this experience to prepare for RIVAL Events 3 and 4 – but what a lot of work that entailed!

Had we met on 19th March, we would have played #lisrival I-Spy

We had so many decisions to make. These ranged from event format (in the end for Event 3 we opted for a 2 hour 50 minute afternoon session with a mix of activities and the inclusion of two 10-minute breaks, as opposed to a one-day event) to the selection (and testing) of technical infrastructure for hosting the gathering of RIVAL network members online (we plumped for Teams). The new format also created extra work for others involved in the delivery of the programme. For example, our keynote and ‘research into practice’ case study presenters all recorded their presentations so that RIVAL network members could watch them in their own time before discussion of the three research projects at the panel session on 19th November. Similarly the members of the Event 4 steering committee kindly provided materials in advance of the  breakout sessions so that the time to plan the four hoped-for RIVAL project outputs was used to best effect.

Happily, all the hard work paid off. We were delighted that everything went to plan on the day itself. Equally, we were pleased with the post-event feedback that RIVAL network members passed on to us, both formally in responses to our feedback survey and informally by email/in tweets/in person, e.g. ‘Very successful virtual event’, ‘interesting online event’, and ‘It was a pleasure to participate’. More specifically, ‘[The] length was good for online’ with the ‘varied programme’ and ‘combination of presentations and discussions… just fab’. The participants enjoyed the ‘balance of talks versus time for break-outs’, ‘the speed of it’, and were ‘glad to have regular breaks’. In their feedback comments they recognised ‘all the background and online coordination’ that goes into ‘a well-organised and realised afternoon, despite the challenges [of digital delivery].’ One said ‘Thanks to [Hazel] and Bruce for hosting and tech support. [They] both set such a great tone which… really supports discussion’. 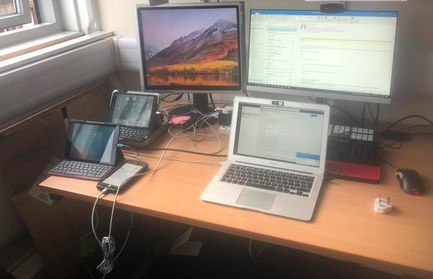 There was also much praise for the main speakers, both in terms of the content of their presentations (e.g. ‘It was great to hear about the research’) and the time that they devoted to preparing for RIVAL Event 3 (e.g. ‘I appreciate the effort [that] the speakers put in’). The decision to ‘split off’ this content was a winner: ‘To watch [the] recordings in advance helped the event not [to be] too presentation-heavy’; ‘[It was] great to [have access to the] presentations prior to the event – allowed for good use of time at the event.’ The breakout sessions were also popular: ‘[I] really enjoyed the break-out session and the hopefully tangible outcomes that will come from it’; ‘It was a really invigorating chat’.

Some of the comments received conveyed a sense of the day as a tonic in a time of pandemic. For example, one network member said ‘It was just the kind of event that we need and thanks so much to [Hazel] and Bruce for setting up the network.  The network lifts us up out of the everyday work we do to keep our services going, and enables us to see what we can all achieve together. Thank you’. Another commented ‘[Participation with RIVAL] gives us all such a boost as we go through the day to day work at this difficult time’.

If we were to run a similar event again, we would allow more time for the panel discussion (it was obvious on 19th November that we could have kept the conversation with our main presenters going for much longer) and for slightly longer breaks (perhaps 15 minutes rather than 10). We could have also done with some more time for the network member news.

RIVAL Event 4, however, will be quite different from the previous three RIVAL events, both in terms of format and content. Normally this would have been a one-day in-person meeting. Instead, we have split it to run virtually on the afternoon of 28th January 2021 (part 1) and the morning of 12th February 2021 (part 2). Unlike the other RIVAL events, the programme for Event 4 was not planned in advance by the RIVAL project team in consultation with the project board. Rather, the idea for the network members to use the time at Event 4 to work in teams to produce (or work towards the production of) tangible outputs, emerged from discussions at the first two RIVAL events. This means that RIVAL network members will dedicate most of their time Event 4 in team meetings to the four outputs. These are a post-project RIVAL event later in 2021; an article for Information Professional: a funding bid; and an evaluation of the RIVAL project itself.

We’re very much looking forward to picking up our RIVAL project work in the New Year. In the meantime, we hope that all network members enjoy a restful break over the Christmas holiday.

Monty dog found fame at #lisrival during the network member news session when mentioned lovingly by his owner.