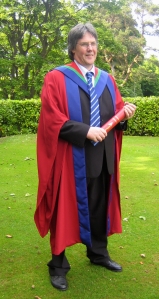 Many congratulations to Dr Robert Irvine, who graduated with his PhD from Edinburgh Napier University on Wednesday at the Usher Hall in Edinburgh.

The starting point for Robert’s work was the acknowledgement that organisational information systems development (OISD) projects have long been associated with failure, and the cost of these failures is enormous. Yet, despite numerous previous studies, understanding of real-world projects is limited. In particular, Robert identified that little was known about the way in which various factors affect the success of OISD projects. In addition, Robert’s work concluded that earlier research has generally tended to focus on OISD projects from an in-house or client perspective, with the views of the supplier largely ignored.

Robert’s investigation drew on empirical data collected from Scottish information systems and technology suppliers. It identified and analysed 20 success factors for supplier-based OISD projects, and a range of more detailed, inter-related sub-factors related to each of the twenty. The work confirmed the importance of many factors known from the extant literature, as well as exposed a number of additional factors not previously identified. The work uncovered important differences between the supplier and client perspectives of these factors.

The means by which OISD project success factors propagate their influences to affect project success was also investigated in Robert’s thesis. This is a complex phenomenon comprising billions of causal chains interacting with millions of causal loops. The topology of sample networks of factors propoagated as part of the doctoral study reflects the complexities of real-world OISD projects. This part of the work proposed a new theory for success factors, and has contributed new insight into the behaviour of these projects.