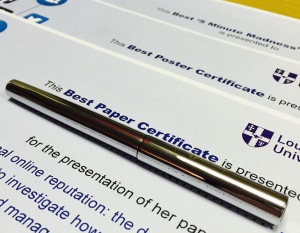 Following two intensive days of invited papers, contributed papers, workshops, PhD student presentations (delivered as 5 minute madness), and posters (not to mention all the chat between sessions in the breaks and at the conference dinner) we returned to Edinburgh clutching the prizes for: 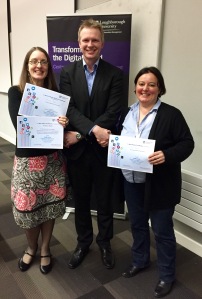 Although not an official prize, Frances and fellow PhD student John Mowbray were also on Tuesday night’s winning conference dinner quiz team (beating the team that I was in with Iris by half a point!)

Other highlights of the conference included some excellent invited papers. I particularly enjoyed meeting and hearing from Danny Budzak of the London Legacy Development Organisation, not least because we used a paper that he published in Business Information Review in my Knowledge Management class last semester. Danny made some very interesting observations about personal information management systems, such as this one favoured by Al Gore. It was also great to see Professor Christine Borgman, and for her to see us, as she delivered the closing keynote paper of the conference over Skype from California on themes from her latest book Big data, little data, no data: scholarship in the networked world.

For me the most interesting paper, however, was ‘Warfare in the information age: the digital transformation of defence operations in the 21st century’ presented by Neil Stansfield, Head of the Knowledge, Innovations and Futures Enterprise at the Defence Science and Technology Laboratory. Neil’s sharp and witty delivery held much the audience spellbound in the closing session on the Tuesday afternoon. He used some fascinating figures and clever analogies to argue for enhanced capacity in information and computational science, as well as in the social sciences, to support UK defence and national security. (I later discovered that Neil and I were contemporaries as undergraduates at the University of Birmingham. He spent much time at Birmingham with friends who studied astrophysics, as did I.)

Of the workshops that I attended I gained most from Professor Bob Galliers’ session in which we critiqued his 1991 paper published in Information Systems Research entitled ‘Choosing appropriate Information Systems research approaches: a revised taxonomy’. It was interesting to see which research approaches have stood the test of time, and identify more recent developments that did not feature in the original paper (e.g. mixed methods as a valid research approach). I also welcomed the opportunity to get to know Loughborough PhD student Josh Morton and one of his supervisors Dr Alex Wilson in this session as we focused our discussion on the applicability of particular methods to Josh’s own project.

Of course much of the benefit of a conference such as this is meeting up with ‘old’ colleagues and collaborators. I very much enjoyed seeing many people with whom I have worked in the past, such as Dr Louise Cooke, Professor Maria Burke, Dr Janet Harrison, and Dr Adrienne Muir (who is about to start her new role as Professor in the Department of Information Management at Robert Gordon University). It was also great to get to know a range of people who, we hope, we’ll see again in the future. These include Sina Joneidy (Salford University); Adedoyin (Lush) Olusina (Nottingham University); Sonia Ramdhian (CILIP – the conference sponsor); and Ming (Vincent) Zhan (Åbo Akademi).

Thanks are due to Professor Tom Jackson’s fantastic team in the Centre for Information Management at Loughborough who pulled the whole event together and ensured that everyone enjoyed – and learnt a lot at – a great conference.

Further information related to the work of presented at IDIMC by the three PhD students from the Centre for Social Informatics, as well as their own conference reviews, can be accessed through the links below.